Over five decades, potassium (K) has been regarded as sufficient in most Tanzanian soils. This generalization has led to limited research with regards to soil K status, plant nutrition and to the development of fertilizer recommendations which include K in fertilizer formulations. Tanzania has K-blended fertilizer recommendations for just a few crops like sisal, tea and tobacco, with other crops depending on inherent K supply from the soil, which is gradually declining due to inadequate K supplies. In recent years, it has been recognized that K levels in some soils are lower than anticipated, and that K deficiency symptoms are now common in certain major crops like cassava, maize, and rice. With such observed deficiencies, it is not possible to provide fertilizer recommendations – that include K – with certainty.

In response to declining potash levels in Tanzanian soils, the first Tanzania National Potash Symposium was held at the Protea Hotel Courtyard, Dar es Salaam, Tanzania from 28-29 July 2015. The Symposium’s objectives/themes were to:

These proceedings are an outcome of the Symposium, which was relevant and timely to address K fertilizer demand in Tanzania, and include the papers presented at the event.

The main theme of the symposium was Potassium for Sustainable Crop Production, Food Security and Poverty Reduction. In this Symposium, two keynote and 11 research papers were presented. The research papers presented were divided into four sub-themes, namely:

A presentation was also made on K-based fertilizer formulation and packaging, but this paper was not made available for inclusion in this publication. The proceedings also include a chapter on the way forward, which provides recommendations for the K research agenda in Tanzania. 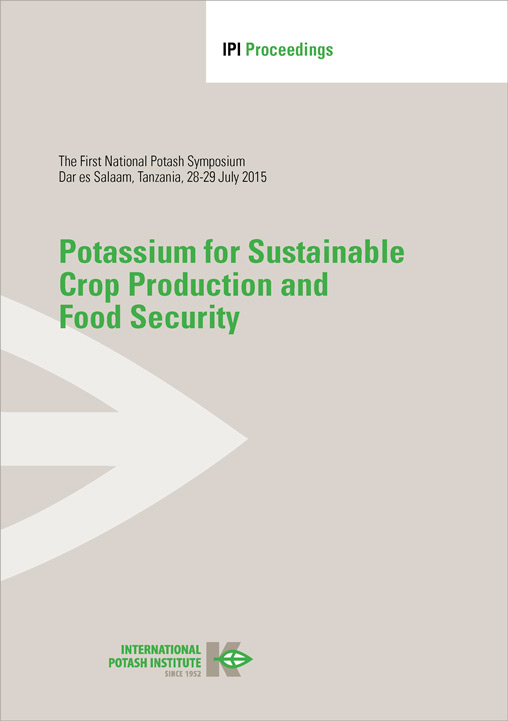